I made a Shiny app to demonstrate the Six Degrees of Kevin Bacon. Except it’s for CRAN authors. And Hadley Wickham is Kevin Bacon.

To help do this, I made the little package {kevinbacran} (as in ‘Kevin Bacon’ + ‘CRAN’, lol) to find the network separation between any two authors on CRAN.

People are connected to each other in networks. What is the average separation of any two people in the network? There’s a popular idea of there being six degrees of separation.

Instead of separation between any two people, we can measure separation from one fixed person. For example, we can calculate a Bacon Number for actors connected to Kevin Bacon, ‘centre of the entertainment universe’.

A more classic example is the Erdős Number, which expresses the separation of mathematicians from the prolific Paul Erdős via published academic papers. And yes, there’s an Erdős-Bacon Number for actor-mathematicians.1

We can extend this approach to any network. One nerdy example is shared authorship on packages published on the Comprehensive R Archive Network (CRAN), the go-to repository for packages for the R programming language. {kevinbacran} can help you do this.

You can learn about the package on the {kevinbacran} site2, see the code on GitHub and feel free to leave an issue. 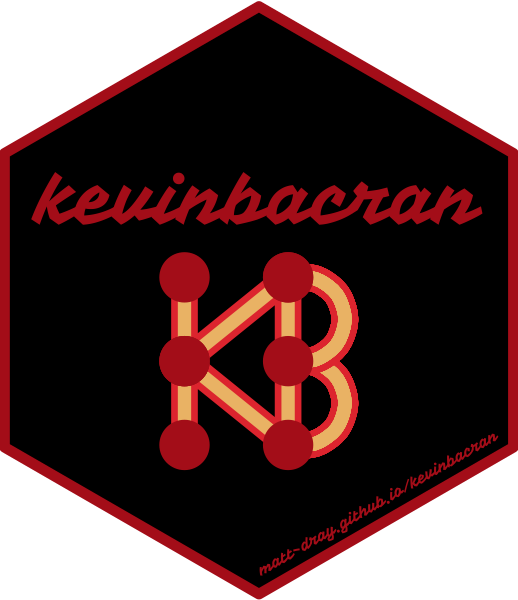 It is currently incomplete, potentially unstable, inefficient and untested. It’s main purpose was to sate curiosity and provide some helper functions for the Shiny app.

The package has only four functions3:

The package relies heavily on others, particularly {cranly} from Ioannis Kosmidis, {tidygraph} and {ggraph} from Thomas Lin Pedersen, and {dplyr} and {purrr} from Hadley Wickham, Lionel Henry, Romain François and Kirill Müller. The code for getting author combinations per package is from Duncan Garmonsway4.

We could use the functions mentioned to obtain graphs between all authors and a single named author of our choosing. We’re going to use Hadley Wickham as the target, since he is among the most named authors on CRAN. This may be largely explained by his involvement in the tidyverse suite of packages and their use in packages maintained by other authors.

Below is an embedded version of the Shiny app, but you can access it in full from its own page on shinyapps.io5, or download the code from GitHub.

Type an author name and hit go. You’ll get the Hadley Number and a graph to represent a shortest path between them.

You are very welcome to use, improve or ignore the code for the app on GitHub, where you can leave issues.

The purpose of this post and the app were to give a flavour of the possibilities for {kevinbacran}. Of course, graph theory is a whole area of study and I haven’t incorporated any analysis of the characteristics of the CRAN network here (e.g. measures of centrality or detection of communities).

Also, if you choose to use your Hadley Number to gain street cred, you may be interested in Robin Edwards’s Hadey Index repo:

How early did you start following Hadley Wickham? Can be used as a last resort to resolve R arguments.