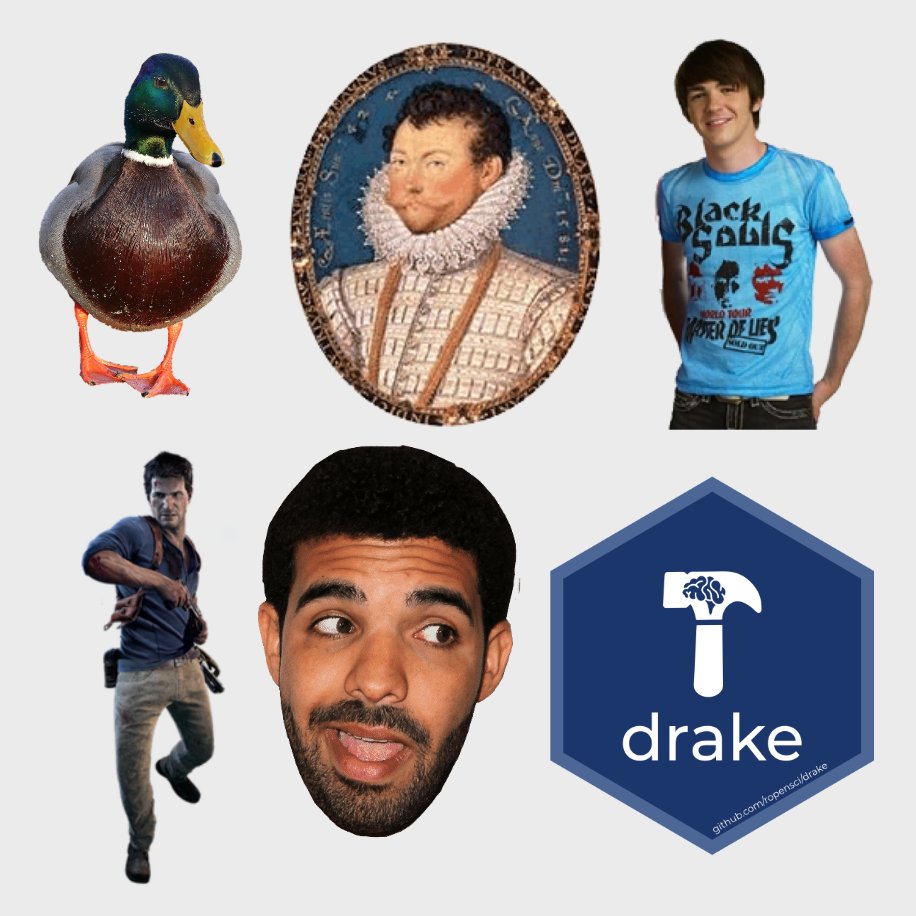 The {drake} package records file interdependecies in your analysis. When files are changed, {drake} only re-runs the parts that need to be re-run. This saves time and reduces error.

This could be useful for Reproducible Analytical Pipelines (RAP), an automated approach to producing UK government statistics that minimises error and speeds production.

Make it to make it

Can you remember exactly which scripts need to be re-executed after a file changes? Or will you have to re-run the entire project from scratch? This is tedious and open to error if you miss something.

A ‘makefile’ can help you. In short, it’s a text file in which you write each step of your analysis in a recipe-like format. Dependencies between data, code and outputs are recorded.

A makefile ensures that only the affected file and those downstream from it will be re-executed. This saves compute time and means you don’t have to remember any dependencies yourself.

{drake} it to make it

{drake} is a package by Will Landau that gives you makefiles with R syntax.

This post contains a very simple example of {drake} in action, but there’s so much more to it. Fortunately, there’s lots of information:

Will Landau has also put together:

I’ve made a very simple {drake} demo for an imaginary RAP project. The demo recreates a very small part of a statistical publication that tracks UK egg production1.

The demo code is on GitHub and the demo report has also been published to the web. Here’s a screenshot of the demo: 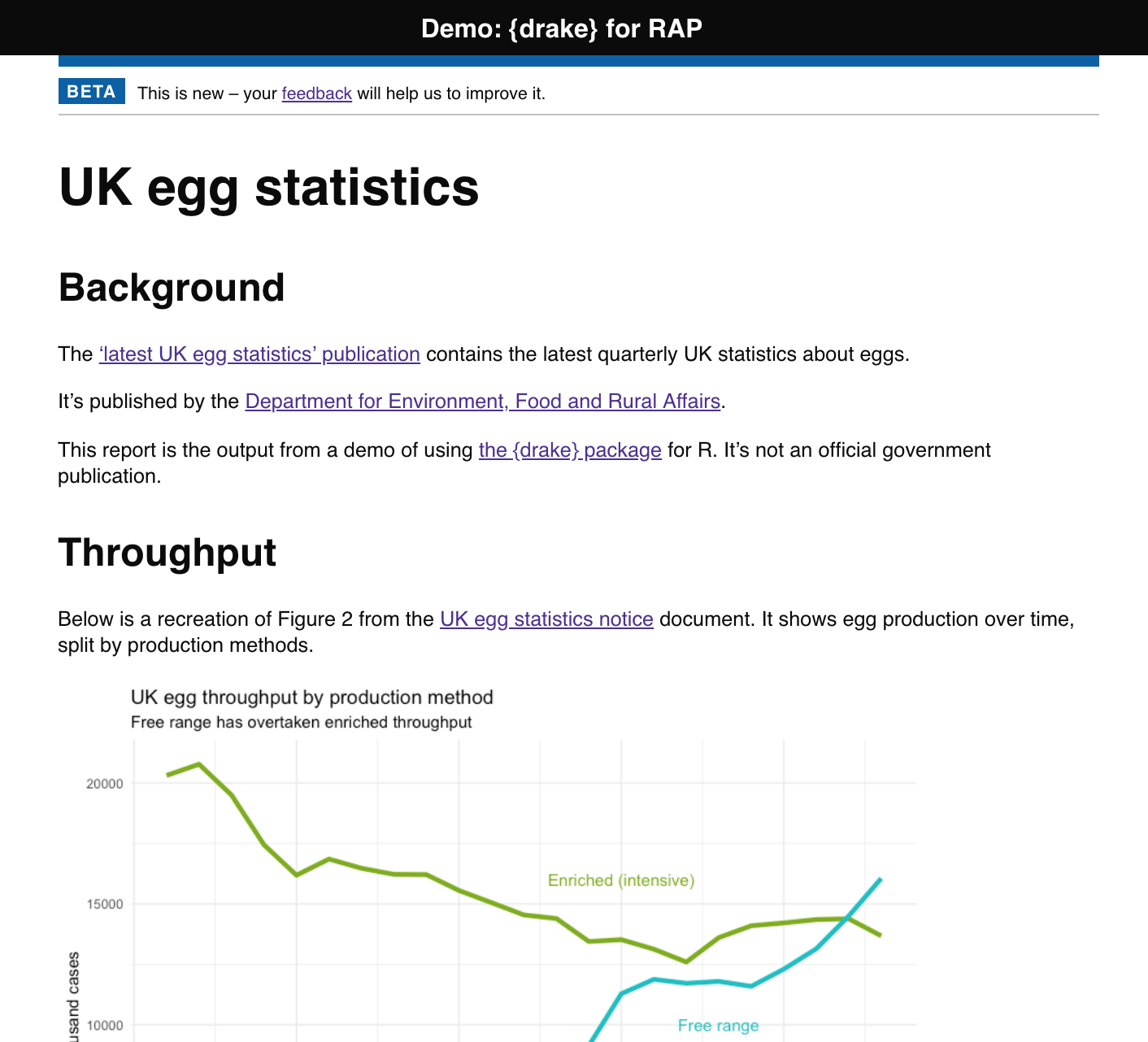 Big shout-out to Duncan Garmonsway for the {govdown} package that recreates the style of GOV.UK – the website of the UK government – in R Markdown.

The rest of this post explains the steps in the demo:

The repo has three simple scripts2 containing the code for the analysis:

The plan.R file needs a little more explanation. It contains the drake_plan() function, to which you pass each function required for the analysis. The functions can be in any order; {drake} works out the order from the dependencies between the scripts and outputs.

The demo plan is very simple, with only four functions wrapped inside drake_plan():

The data and code are all in place. How do we run the analysis?

Everything we need is stored in a small file called make.R. It starts by calling source() for each R script:

Sourcing the plan file results in the drake_plan() function being run. The output is a special drake_plan data frame object, which is called egg_plan in our demo. It has columns called ‘target’ and ‘command’ and a row for each function in our analysis:

The plan object acts like an instruction booklet, which can be read ‘to each target (data and outputs), apply the named command (the functions of the analysis)’. So the contents of the egg_plan data frame can be read

So we have the instructions stored in an object. Now we can (optionally) produce a dependency graph of these targets to get an idea of the relationships between the elements of the analysis.

The first step to create the visual is to extract information about the egg_plan in a configuration (‘config’) list object. One element of the config is, for example, an igraph object that helps construct graphs from your workflow. The function to get this is drake_config().

A number of {drake} functions can take the config object and do something with the information inside it. In our case, we’re going to pass the config to vis_drake_graph(), which builds an interactive dependency graph using {visNetwork}.

This generates an interactive output (see it here). Here’s a screenshot: 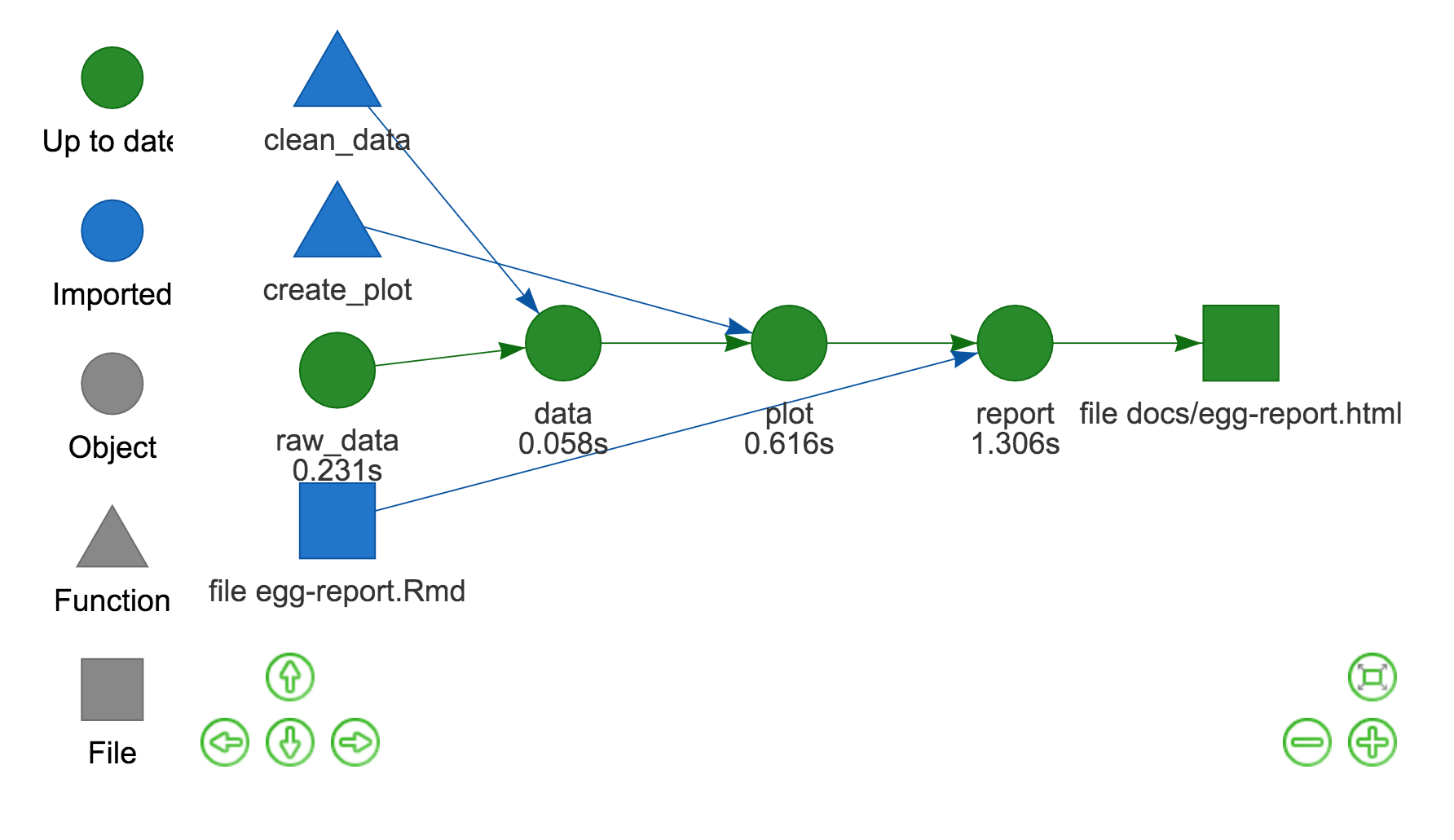 The visualisation is shape-coded by target type (e.g. functions are triangles) and colour-coded to show whether everything is up-to-date (e.g. green if it is). Arrows show the file dependencies (e.g. both the clean_data function and raw_data file come together to produce the data object).

Having satisfied yourself that the plan looks correct, running the plan is as simple as:

This executes all the instructions laid out in the egg_plan object and our HTML report pops out at the end.

Of course, re-running the plan straight away again does… nothing. No code needs to be re-executed if nothing’s changed!

Side note: the cache

Turns out that {drake} is storing all the intermediate objects that were created when making your plan. They’re cached in a hidden .drake/ folder so they can be retrieved without needing to be re-created.

This means you can use the .drake/ cache to supply objects to an R Markdown file, which is achieved by either readd()ing or loadd()ing them. For example, the plot in the demo R Markdown file was called with loadd(plot).

If anything changes in our data or code then the downstream targets will be out of sync. Let’s pretend we’ve changed a line of code in the create_plot() function, which could be something is superficial as altering its title. What do you think will happen?

Well, {drake} knows there’s been a change. You can check this by running source("R/functions.R") in make.R again and then run outdated(egg_config). This prints the name of the altered file plus the other files impacted by it.

We can see this by recreating the dependency graph (see it here): the plot target is outdated, as are the targets downstream that depend on it (report and the egg-report.html file). This is indicated by them being coloured black. Here’s a static version: 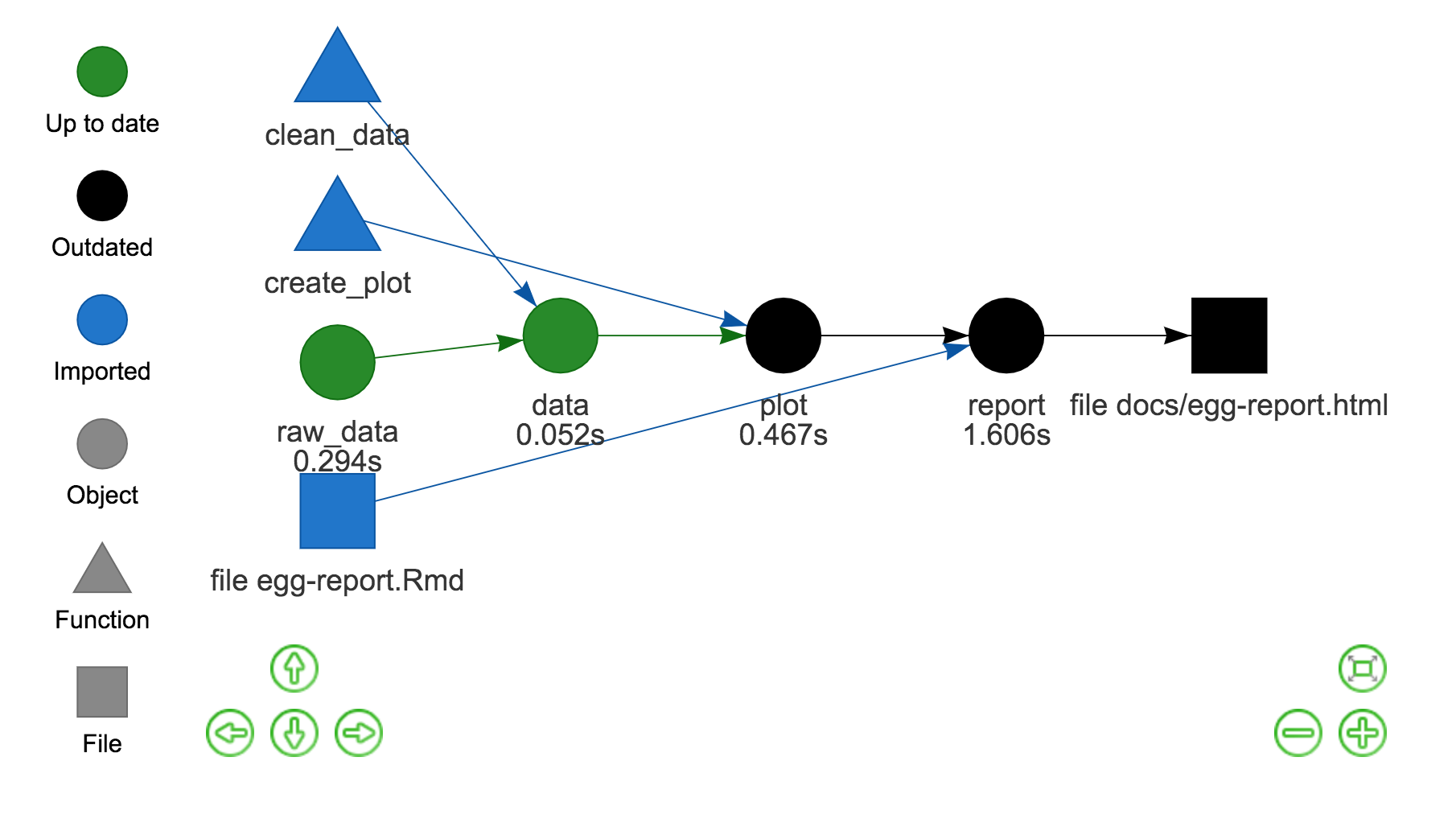 So now we can see the real power of {drake}, as re-running the plan now will regenerate only the outdated files.

At its simplest, you create a plan.R and you make() it.

I think this alone can help build the reliability and trustworthiness of published statistical reports.

Of course, this is a very simple use of {drake} and should act as a starting point. {drake} does a lot more, like high-performance computing and memory management, that may also come in useful for RAP.