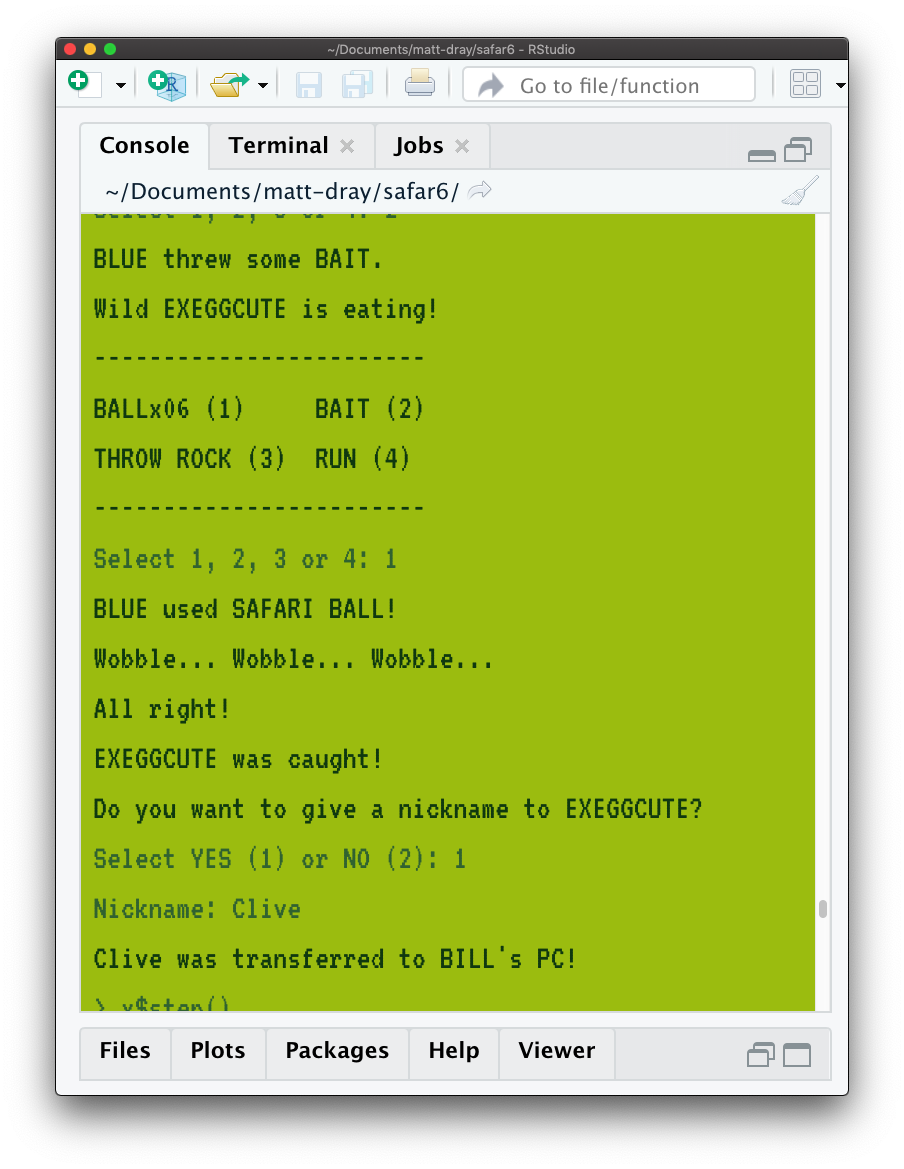 An original Nintendo Game Boy playing Pokémon… if you squint.

I created the R package {safar6}, which contains an R6-class object to simulate a simplified, text-based version of the Safari Zone sub-area from Pokémon Blue.

I also made the ‘gamelad’ RStudio theme to mimic the screen of a pukey-green original Game Boy. Pair with a blocky monospace font like VT323 for that 8-bit experience.1

Kangaskhan you believe it?

Did you know you can play games in R?

The latter uses object-oriented programming (OOP) for handling game elements, thanks to the {R6} package. So, a room in the castle is an R6-class object with specific fields (variables), like whether the door is open, and methods (functions) like openDoor() that can change the door state.

This is interesting because R is better known for being a function- rather than an object-oriented language. You can learn more about OOP in R from Hadley Wickham’s Advanced R book and more about the R6-class from the {R6} website.

A Chansey to learn

I wrote a post about using {R6} to simulate an Automatic Bell Dispenser (an ATM, basically) from Nintendo’s Animal Crossing: New Horizons (2020) game. Fields include savings and methods include withdraw(), for example.

Obviously my next step was to use {R6} for a game, but I wanted to start small. The original Pokémon2 games were effectively text adventures with some random-number generation and simple calculations going on in the background. Would it be possible to simulate some aspects of it?

‘Would you like to join the hunt?’ Via Bulbapedia

Luckily, there’s an in-game sub-area that’s self-contained and much simpler than the mechanics in the rest of the world. In the The Safari Zone you’re only allowed to take 500 steps, you can only use a special type of ball to capture wild Pokémon (of which you only have 30) and you can’t reduce a wild Pokémon’s health (hit points, HP).

So I went ahead and wrote an R6-class object to mimic the Safari Zone and bundled it in the {safar6} R package.3

A quick Tauros of the game

You can install the package from GitHub. Loading the package provides a reminder of how to play.

Basically, the package contains an R6-class object SafariZone, which you initialise like safari_zone$new(). Make sure to assign a name to it (x in these examples). This starts a routine with some text from the game and some interactive elements. Sometimes you’ll be prompted for a response; type a value and hit enter to make a choice.

Here’s the opening sequence, which asks for your name and invites you to play:

You can then ‘move around’ by using the step() method on your SafariZone object. This method does most of the hard work in {safar6}, since it contains all the logic required for a wild Pokémon encounter.

The underlying values and calculations in step() are all true to the original game. That includes the encounter rate, which is less than 1, so you’ll likely have to step() a number of times before you find a Pokémon.

For convenience, the step method prints the number of steps remaining:

Each step is treated as though you’re walking through the tall grass, which is where you find wild Pokémon. There’s a weighted chance of encountering certain Pokémon at certain levels, but each wild Pokémon also has (hidden) randomised individual variation in its stats (HP, speed, etc) that impact your ability to catch it.

At the prompt, you can throw a Safari ball straight away to attempt a catch, or you can run away from the encounter. You can also influence the Pokémon’s state: throw a rock to raise the catch chance (but you’ll also increase the flee chance) or throw bait to reduce the chance of fleeing (but that’ll also decrease the catch chance).

The Pokémon will be angry or eating for one to five turns.

When you throw a ball, the success of a capture attempt is determined by several factors, like the Pokémon’s HP, its level and its catch rate (possibly modified by rocks and bait). It may also run away given factors like its speed.

You may want to change your strategy. More rocks, or some bait? While it’s still angry, you could take advantage of its heightened catch rate by throwing another ball.

Success! You can choose to give your ‘captured friend’ a nickname.

Try to catch as many as you can before you run out of steps or balls. You can x$pause() the game at any point to see your remaining stats and you can check out x$bills_pc to see what you’ve captured4.

When the game is over, you’ll see an endscreen with your results.

The Safari Zone in the original game was pretty tricky. The Pokémon were flighty and it was especially hard to trap rare encounters like Chansey, Pinsir and Scyther.

The most captures I’ve made on a playthrough of {safar6} is three (!), so use that as a yardstick.

I tried to keep things simple, so there’s a number of omissions compared to the original game. For example, there’s no visuals or sounds; I’ve simulated only the ‘Center’ hub area of the Safari Zone; you walk around as though you’re always in tall grass; you can’t fish or use different rod types; you’re restricted to the catch rates and Pokémon identities of the Blue game (not Red or Yellow, which are different).

On the flipside, I tried to maintain some subtle true-to-the-original elements. For example, you’ll be prompted to enter your name; you can nickname your Pokémon; there’s ‘wobble logic’ for deciding how many times the ball should shake before a capture; and the majority of the text is as it appears in the game. I’ve also made it so the text is progressively revealed, character by character.

In particular, I’ve tried to keep the various hidden and non-hidden Pokémon stats and calculations true to Pokémon Blue. For example, I built in:

There’s no guarantee I’ve got these things completely right, but the gameplay appears similar to the original, so I think it’s close enough.

Information about game mechanics and values were relatively tricky to come by. The following resources were really important:

I later saw on YouTube some interesting attempts at building small text-based Pokémon games like {safar6}. For example, one in Python by Rylan Fowers6 and one for the TI-84 calculator (of course) by Aeri.

Obviously this is for fun and learning. Play at your own risk. Feel free to report any bugs (as in code problems, not bug-type Pokémon) as GitHub issues.

And do not, I repeat, do not throw rocks at animals IRL.