Misson Across the Isle of Wight

I used R to identify and map hazards on a potential straight-line walking route across the Isle of Wight, mimicking Tom ‘GeoWizard’ Davies’s ‘Mission Across’ series of YouTube videos. You can jump straight to the interactive map.

Tom ‘GeoWizard’ Davies is perhaps best known for his YouTube channel, where he posts Twitch stream highlights of Geoguessr, a game where you pinpoint a randomised location based only Google StreetView.

He also chronicles real-life trekking adventures, usually with a twist. Particularly captivating are the ‘Mission Across’ videos, where Tom attempts to cross a country in a straight line on foot. That includes having to clamber over hedges, swim across ponds, get stuck in bogs and risk the wrath of local farmers and landowners. So far this has covered Wales, Wales again and Norway, with a Scotland series due this month.

Of course, this requires a lot of planning to decide what the best route is and to make sure you don’t traipse directly through someone’s living room in your muddy boots. Typically this might involve lots of time in GIS software and various online mapping services.

I learnt recently of the {osmextract} package for the R language, which fetches geographic features from OpenStreetMap, and wondered how easy it would be to use R to do a light-touch assessment of straight line routes in a ‘Mission Across’ style. Basically, can we work out the number and type of obstructions we’d face on a given route?

You can jump straight to an interactive map with my example for the Isle of Wight, or keep reading for the code and an explanation.

As an aside, Tom has also made the album ‘16 Bit Adventure’ under the moniker ‘Amynedd’; music which accompanies the ‘Mission Across’ videos. Press play here for inspiration as you read on.

R is very capable as a code-led tool for geospatial manipulation and mapping. Along with {tidyverse} for data wrangling, there’s a few geospatial packages we need: {geojsonio} lets us read GeoJSON files, {sf} is for handling ‘special features’ geometry in a ‘tidy’ way, and {leaflet} lets us create interactive maps. {osmextract} was the main motivation for this post; it fetches OpenStreetMap features pretty painlessly.

All these packages can all be downloaded from CRAN with install.packages().

For purposes of this post, I wanted to look at a small, contained, ‘regularly-shaped’ geographic area to keep things simple. It didn’t have to be a country.

I settled on the Isle of Wight (IOW)1, a small island off the south-coast of England. It’s mostly rural, with farms, hedges and waterways to cross, but there are certainly more built-up areas. It also helps that the IOW is featured in the {osmextract} documentation! 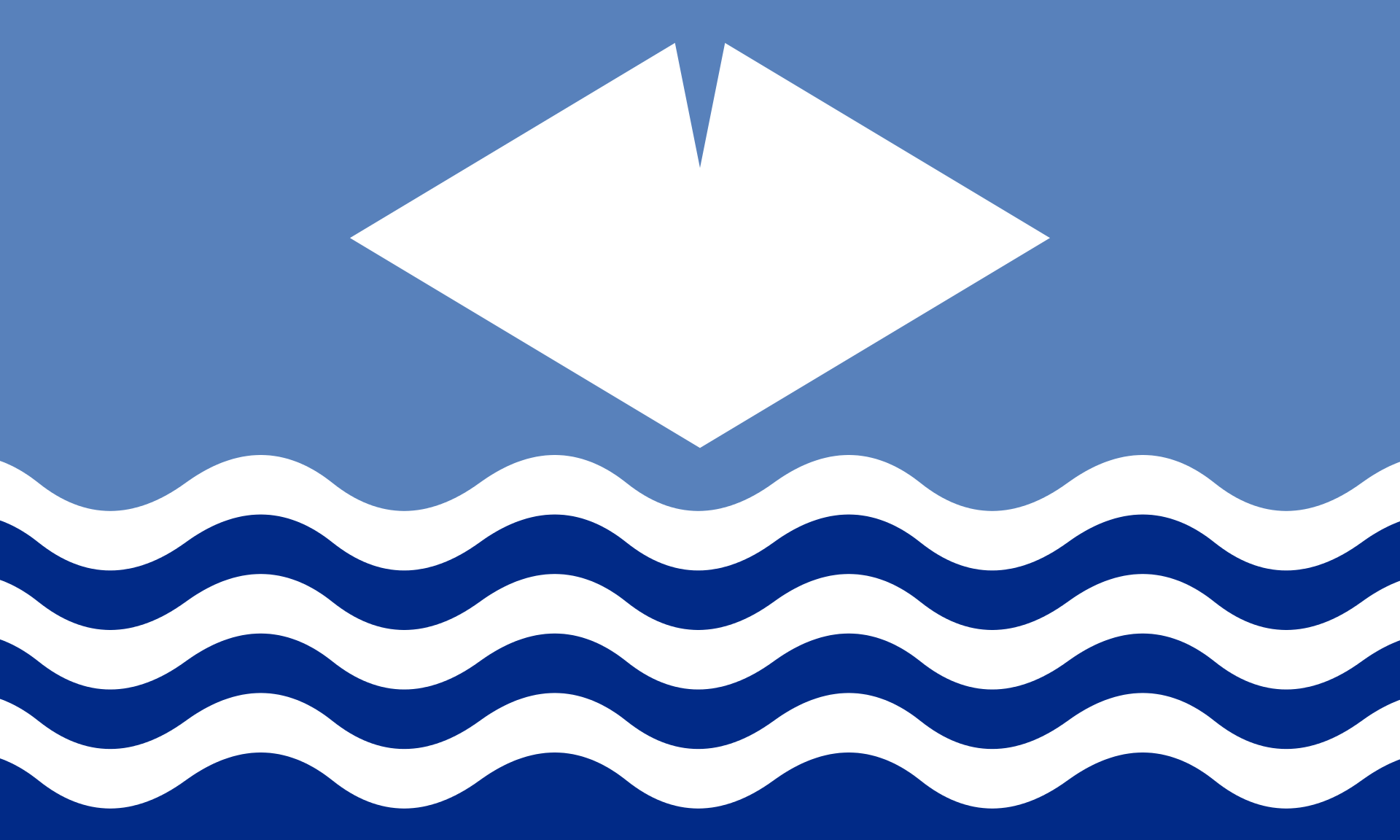 The Isle of Wight: a vexillologist’s delight.

First thing is to fetch a polygon that represents the extent of the island. Fortunately, Local Authority District (LAD) boundaries for the UK are available to download from the Official for National Statistics (ONS) in GeoJSON form. We can filter for the IOW, specifically.

I’ve used boundaries that are ‘clipped to the coastline’ because I don’t think you should have to swim out to the low-water mark to complete such a challenge.

We want to identify features like hedgerows, buildings and waterways that will become obstructions for our imaginary walk across the island. The oe_get() function from {osmextra} is an easy way to pull features from OpenStreetMap en masse. You can supply a location and receive features within that area.

First, the polygonal features, which you can get with argument layer = "multipolygons". You can see that a geometry column is returned, which contains the coordinates for the polygons.

Of course, we can grab line features too. The default for layer is lines, so we don’t need to supply this argument.

For convenience, I’m simplifying the features down to the ones we care about. For Tom, hedgerows were a constant nuisance, waterways were cold and perilous, and buildings could contain angry landowners. We want to avoid them all, ideally.

We can create a function to extract named features (we want rows containing ‘barriers’, ‘buildings’, ‘natural’ and ‘waterway’ features), and then iterate over our lines and polygons to isolate them. I’ve put them into a single object so it’s easier to reference them later.

Of course, we need to specify a straight line route.2 For this demonstration, and in interests fo speed, I’ve just chosen one that looks alright by eye in terms of obstructions.

Of course, you can use the approach outlined in this post to try other lines and discover quantitatively which ones have the fewest obstructions. That’s the subject of an upcoming Shiny app, which will allow the user to provide a line and get feedback on the number and count of hazards.

Crucially, the line is clipped to the boundary of the island, so it goes from coast to coast.

You’ll notice we get a warning about ‘planar’ coordinates. As far as I know (as a non-geospatial analyst), this is related to working with data that assume the earth is flat (!) versus curved. Of course, calculations will be slightly off if you assume no curvature. I’m not bothered with that on the scale of the IOW, so I’m ignoring it (and suppressing subsequent warnings in this post).

Here’s a quick preview of where our line is: 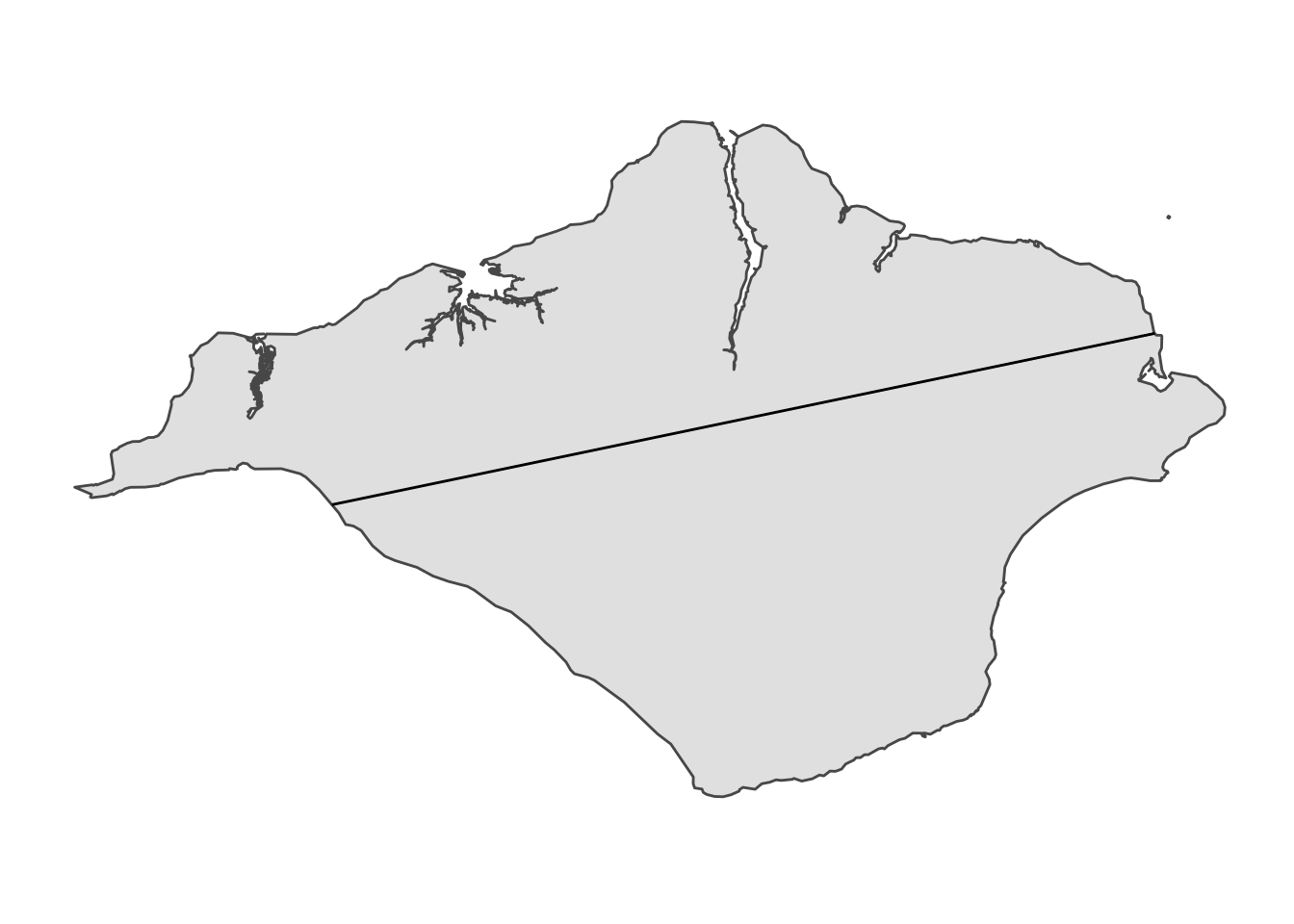 In practice it’s very difficult to keep exactly to the line and some deviation may be required at a landowner’s request, for example. What’s an acceptable amount of wiggle room?

Tom spoke in one of his videos about assigning scores to a mission based on minimal deviation from the line. For example, staying within 25 m of the line either side would be a ‘platinum’ standard.

We can build a buffer around our line to create a platinum zone, which will be a useful visual aid in the final map.

Our features object currently has all the lines and polygons within the IOW boundary, but we only want the ones that come in contact with (i.e. intersect) with our proposed route. The st_intersects() fcuntion from {sf} does exactly that.

We can create a quick table to see what the obstructions are for this route.

You can see how this information is useful if you wanted to try other straight-line paths and see how they stack up against each other. Maybe you want to reduce the number of barriers (typically hedgerows); maybe you don’t mind swimming across a large water body.

So we have the objects we need: our straight-line route, the platinum-zone buffer and all the features that cross our path. Now to map it. We can use the {leaflet} package to layer these up on an interactive map, allowing the user to inspect the route and the hazards along the way.

So, you can inspect the route interactively by zoom and dragging, by hovering over highlighted features to see what they are, and by turning on and off the different map and feature layers for more or less context.

There’s a lot of stuff missing from this approach to make it useful for actually planning a straight-line route. For example, I haven’t included elevation or land-use type (you don’t want to spend a few kilometres in a marsh). You’re also restricted to a two-dimensional overhead view.

Of course, I also hard-coded the start and end points for this demo. The real power of this approach would be to let the user choose where they want to start and end and feed back on the identity and number of obstructions for each line suggested. To this end, I’ve started developing a simple Shiny app.